Jim Clarke
“Name the thirteen wine regions of Germany. Name an important producer from the Nahe. What are the Öchsle levels for Qualitätswein in the Mosel?” Just another theory quiz in Manhattan, as sommeliers-in-training prep for exams. Except this Manhattan lies not on the East Coast but in the dead center of the country: Manhattan, Kansas, population 53,000. 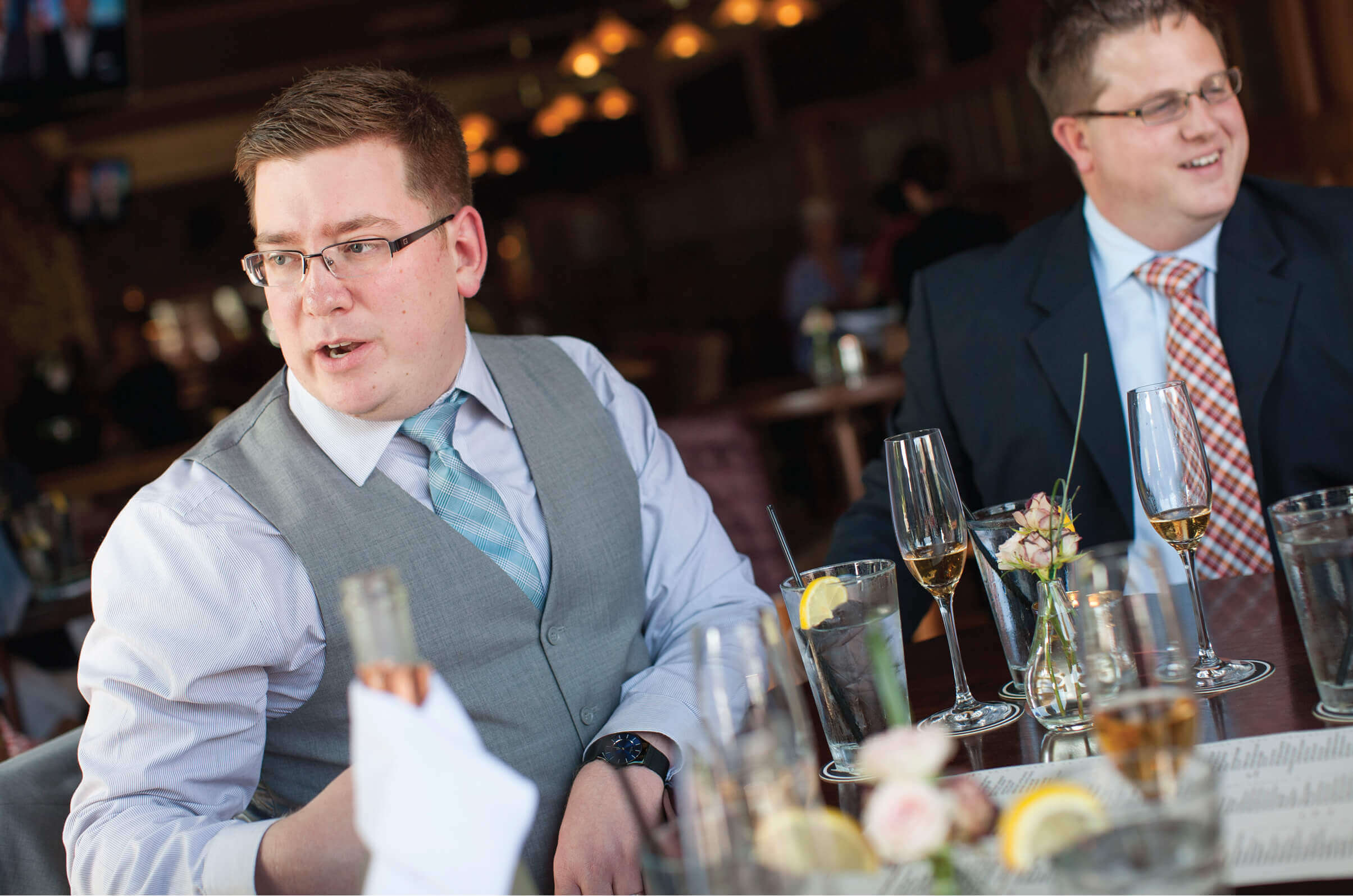 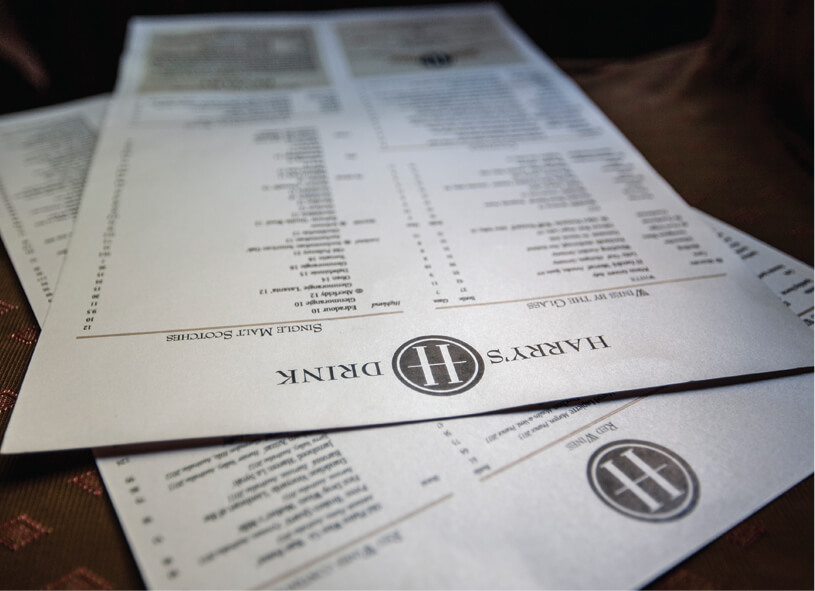 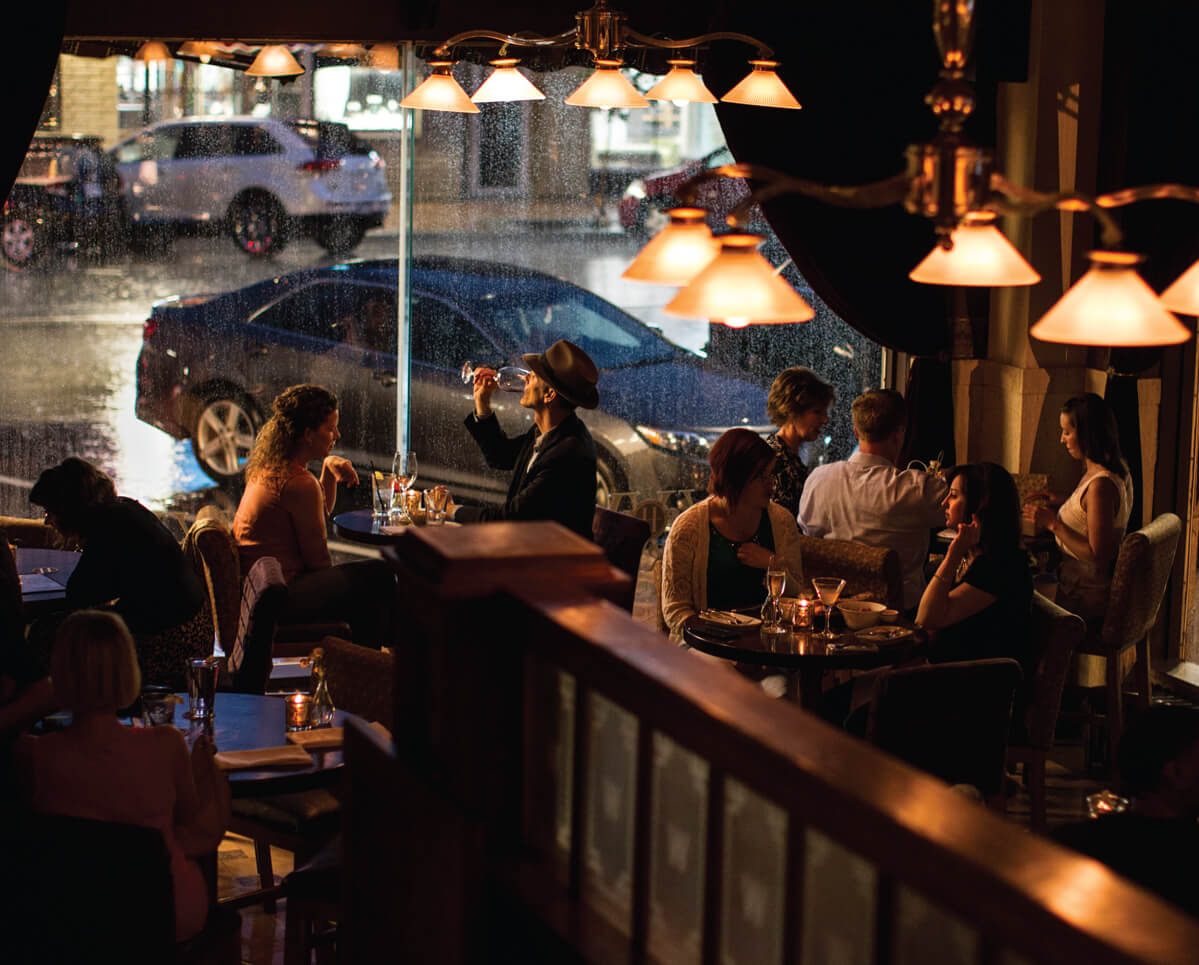 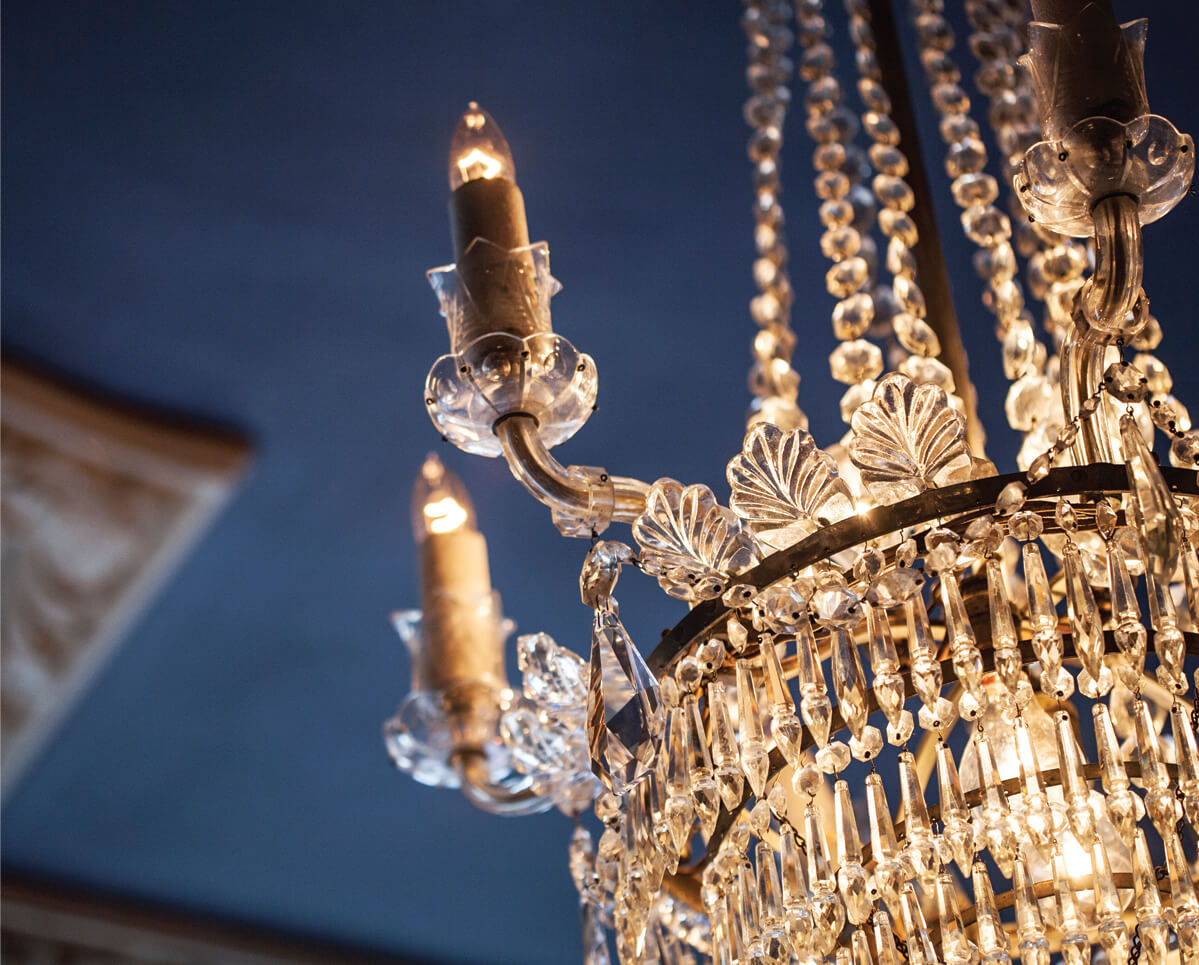 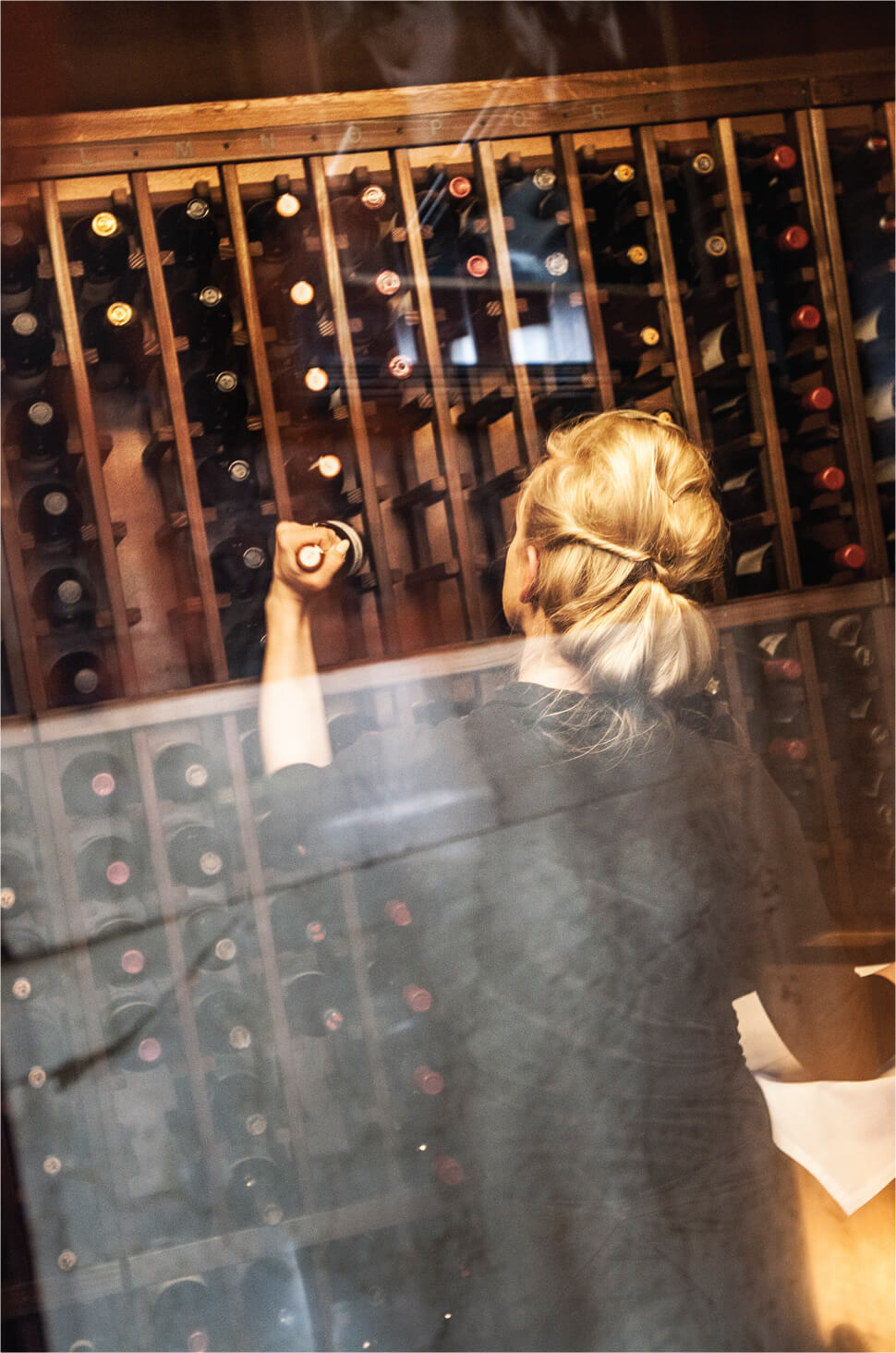 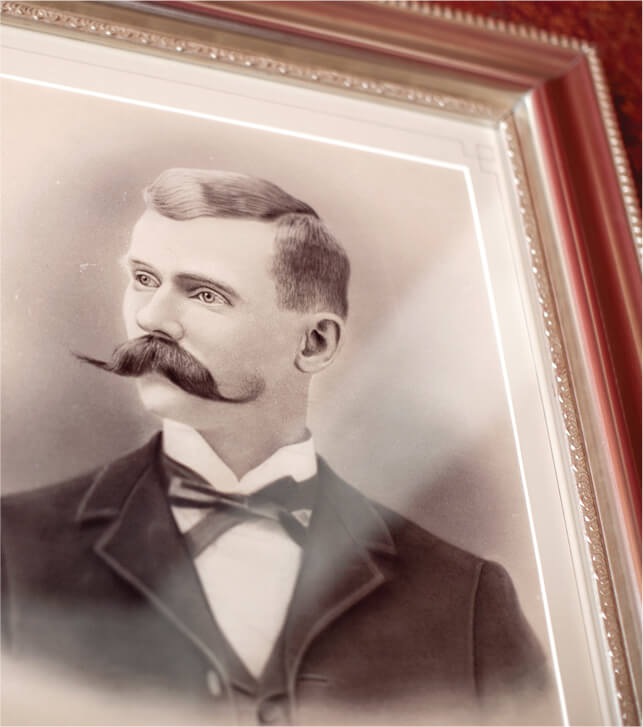 Kansas is not the first place one thinks of for a sommelier scene. While the eyes of the wine industry are on the U.S.—recently declared the largest wine market in the world, and given our low per-capita consumption, a market with plenty of room for growth — it’s not Kansas they’re talking about. According to Business Insider, per capita wine consumption in Kansas is among the lowest in the country at 3.2 liters per year — four bottles and one glass. Many assume the fine wine scene is focused on the coasts; what the average coastal-dwelling snob might call “fly-over” states, the sommeliers who serve them might call “beer” states.

Does a state need a minimum consumption rate to support a wine community, and a good selection of wine? Apparently not. At the center of Manhattan’s wine scene is Harry’s, a restaurant inside the historic Wareham Hotel (now residential), with a list of 215 selections that would make most any sommelier feel at home.

The food menu reads like steakhouse classics — a wedge salad, prime rib, crab cakes — fleshed out with creative seafood and poultry options and modern touches such as ceviche, creative use of pickled vegetables, and so forth. The food itself is very good, and dishes taste more vibrant and boast more creative flavor combinations than the menu might suggest. The wine list comes as a surprise, but not because it doesn’t match or suit the food. It displays thought, passion, and diversity, and that’s what catches your attention.

The list is all on one page, on the back of the menu. “The list used to be four pages,” says wine director Ian Hulon. “We changed it to one large sheet so everyone at the table could see what’s on offer.” What’s on offer includes wines from all over the world. Chardonnay dominates the white selections, but not oak-bombs or workhorse wines; California selections include wines from Lioco, Peay, and Copain. “Our guests order a lot of domestic Chardonnay when we don’t get to the table first.” When Hulon or his servers do guide the guest, Hulon says their Chardonnay-drinking guests often land in France, drinking the likes of Yves Girardin and Colin-Morey.

Riesling gets a good deal of column inches (as they say in the newspaper biz). When you glance at the list, you also notice that Chenin Blanc, Picpoul, and Vinho Verde get nods; looking more carefully, you see they’re not token selections, but exciting choices that open up the range of experience available to the guest rather than simply offering up brand names as a security blanket.

It hasn’t always been like that. The list inherited by owner Evan Grier was what he calls “a 1980s Country Club List, with maybe fifty-five or sixty-five offerings: a lot of Cabernets, lots of big-name Chardonnays, lots of heavy hitters.” By-the-glass offerings included all the usual suspects such as Kendall- Jackson Chardonnay and Beringer White Zinfandel. Grier says finding the right balance took some time, and some testing too; rather than dropping White Zin cold turkey, they introduced guests to other options, and the wine dropped from moving 21⁄2 cases every week to a case every few weeks before they removed it entirely. But generally guests greeted the changes with enthusiasm, even among those who weren’t familiar with the new offerings.

It might come as a surprise that Grier would even have access to the sort of wines he does now, wines that allow Harry’s to get away from the negative stereotype of Midwestern wine culture. According to Hulon and Grier, greater availability is in fact a relatively new development, dating back to the beginning of the Great Recession in 2008 and 2009. “I don’t know if we had one grower-producer Champagne in the state before six years ago.” But the East Coast’s loss was the Midwest’s gain.

Importers found that they could no longer release allocated wines in just a couple of major metropolitan markets and find homes for them. As the recession hit the coast harder than the middle of the country, they began sending more of these coveted wines into markets such as Kansas. “Some wines used to arrive in six bottle allocations for the whole state,” says Grier, “now 12 cases arrive, so we can buy enough to support a wine on the list until the next allocation.” Those allocation levels have remained stable even as the economy has recovered, largely because importers discovered that the middle states were a more receptive market than they had presumed, and the doors began to open.

Although some of the wines now listed were once destined for East Coast restaurants, the wine culture and the program at Harry’s are homegrown. Hulon and Grier are not carpet- bagging East Coast wine culture into the Midwest; the former grew up about eighty miles away in the small town of Lyndon, and Grier is from Wichita. Grier took the Court of Master Sommeliers Introductory Course in Tulsa in 2010, coming back for the Certified Sommelier Exam the following year with Hulon in tow. The list turned around, and expanded. Staff interest grew with it, and the restaurant has not hesitated to invest in their people.

Not only is on-site training continuous, including weekly meetings and homework, but these days Grier and Hulon bring two or three staff members to Tulsa each year to take Introductory and Certified Sommelier-level classes and exams. At the moment they have three certified sommeliers at the restaurant, with a fourth sitting the exam in autumn. The enthusiasm rubs off on other staff members, and even if they don’t delve into wine geekery with the same enthusiasm, it encourages many to find their own specialty; one is taking the first steps into the Cicerone program, for example, and another, who spent some time studying in Edinburgh, has made herself an authority on Scotch.

Training doesn’t happen in isolation. Harry’s hosts a weekly blind tasting group that includes both employees and industry folks from the outside. Kansas’s unusual “Four Tier” system (restaurants buy from retailers, basically, even if they actually place the orders with distributors) means that the division between retail and restaurant selections is smaller than in many states, and relationships between the two are more fluid. These interactions generally create more cooperation than competition, though potential for friction is inherent in the system’s structure. For example, Hulon says that rare Bourbons sometimes make it to the retailer but then aren’t sold on to the restaurant.

“Prior to 2010 we had never seen a winemaker in the community,” says Grier, but as the trickle of allocations into Kansas swelled to a stream, it brought winemakers with it, creating new learning opportunities. This development also enhanced connections to the source of wines on the list. Grier says almost half of the wines on their list have some sort of personal story behind them, be it meeting the winemaker, a revelatory tasting moment, or personal development victory (such as a wine that appeared at Hulon’s Court of Master Sommeliers Certified Sommelier exam).

Winemakers coming to Kansas inspire local wine trade members as well as the community at large via wine dinners and other interactions. Harry’s throws a weekend wine festival called Uncorked that includes one such winemaker dinner, this year featuring Revelry from Walla Walla. The event is entering its third year; the dinner plays to a packed house of 65 people or so, whereas the accompanying tasting events attract about twice that — a second day of tasting was added to satisfy demand, as well as expand the event from wine to include bourbons and whiskies as well (Grier also owns Bourbon + Baker, a whisky destination with a menu of Southern dishes done “small plates” style). Last year Uncorked sold out within a week of its announcement.

Which is all to say that Grier’s and Hulon’s efforts are being sown on fertile ground. “Guests are craving new things,” says Grier, “and most of our guests trust us and are willing to give things a try.” Not just the millennials attending Kansas State, located in town, but also their parents and the influx of visitors that arrive for intercollegiate athletic events. Thanks to a nearby military base, Fort Riley (with a daytime population of nearly 25,000 people), more guests than one might expect were already familiar with some imported wines. “They’re really an important part of our fledgling wine community because of lot of those individuals have lived all over the world, and they look at a Spätlese or some other German offering and go, ‘Oh, this is awesome! I didn’t know you could get this here.’ That’s been really fun for us to see, and gives Ian room to stretch his legs in terms of offerings.” (Until about three years ago, Grier and Hulon shared responsibility for the list, but now Hulon runs it in its entirety).

Every sommelier has had the experience of misreading a guest, whether that meant low-balling a big spender or playing it safe when a guest was adventurous. Harry’s demonstrates that something comparable can happen on a big scale, too; the industry underestimated a locality’s potential for supporting a diverse and high-end wine program, which became a self-ful- filling prophecy until economic demands forced more fine and boutique wines into the market. As things stand in Kansas, the population still isn’t drinking a lot, but that doesn’t mean they’re not drinking well.

Publisher’s Note: I remember Evan and Ian, and their driving from Manhattan to Tulsa to sit Certified Sommelier Examination. I had no idea where Manhattan, Kansas was and Evan suggested some surprising wines for that level of examination. I was intrigued, and promised Evan one day I would visit Harry’s, in this place called Manhattan. I also began following their wine list via the restaurant’s website. Harry’s was my first choice for a restaurant profile in this magazine because it represents the strength of a vision and the mistake the industry makes in underestimating markets. Evan was surprised when we asked to visit. At dinner he told the story of his Certified Sommelier Examination experience. Unbeknownst to me, he had saved the last bottle of one of the wines he recommended during his service so that we could share it when I visited. Thus, four years later, he surprised me with that story and the bottle of Gaillard Cote Rotie 2006—one of the most meaningful bottles of wine I have ever enjoyed. Teachers seldom get to see such vivid evidence of the power of education and experience in shaping a market. Thank you to all the organizations bringing education and experience to underestimated markets. –JT