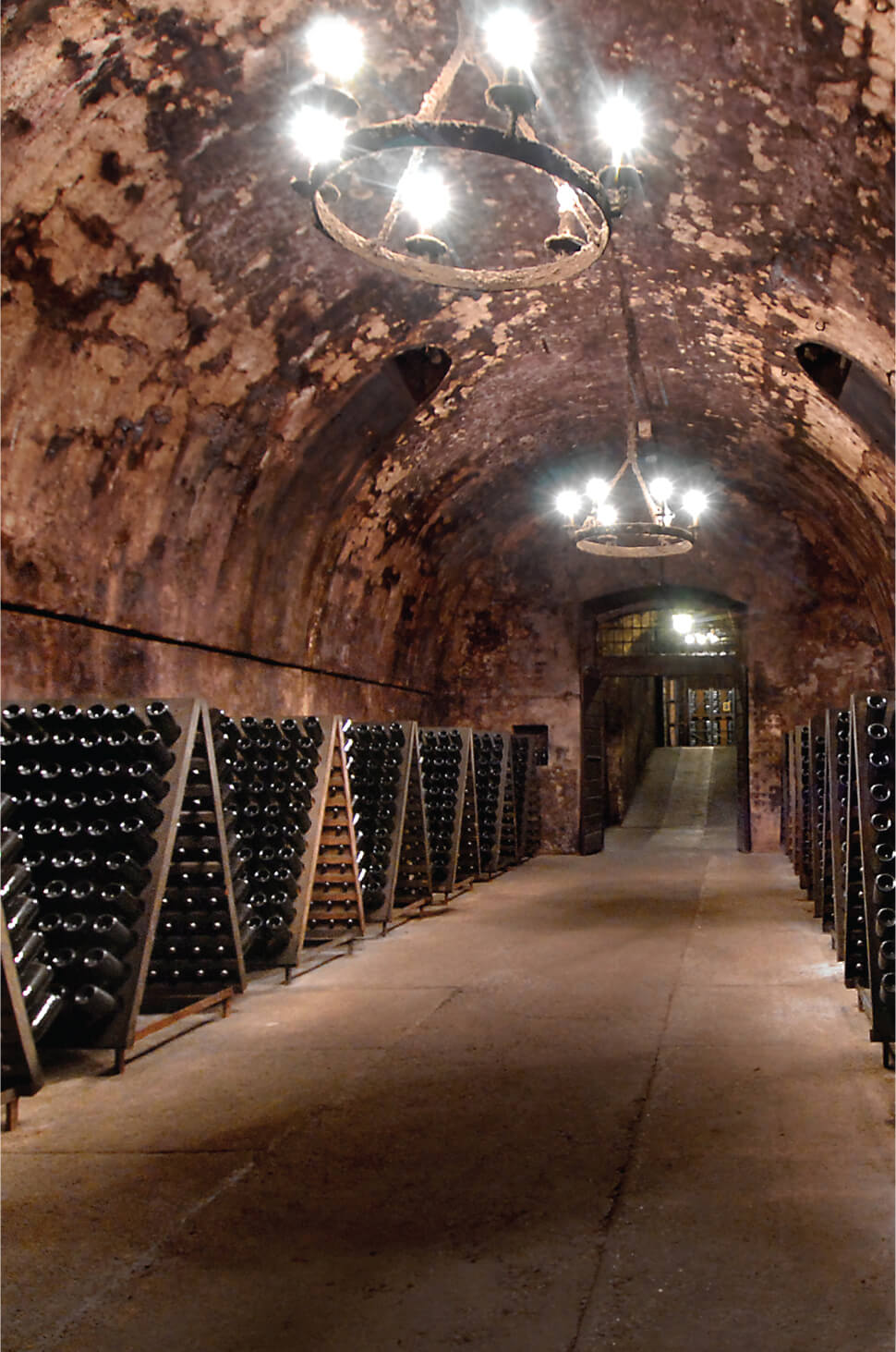 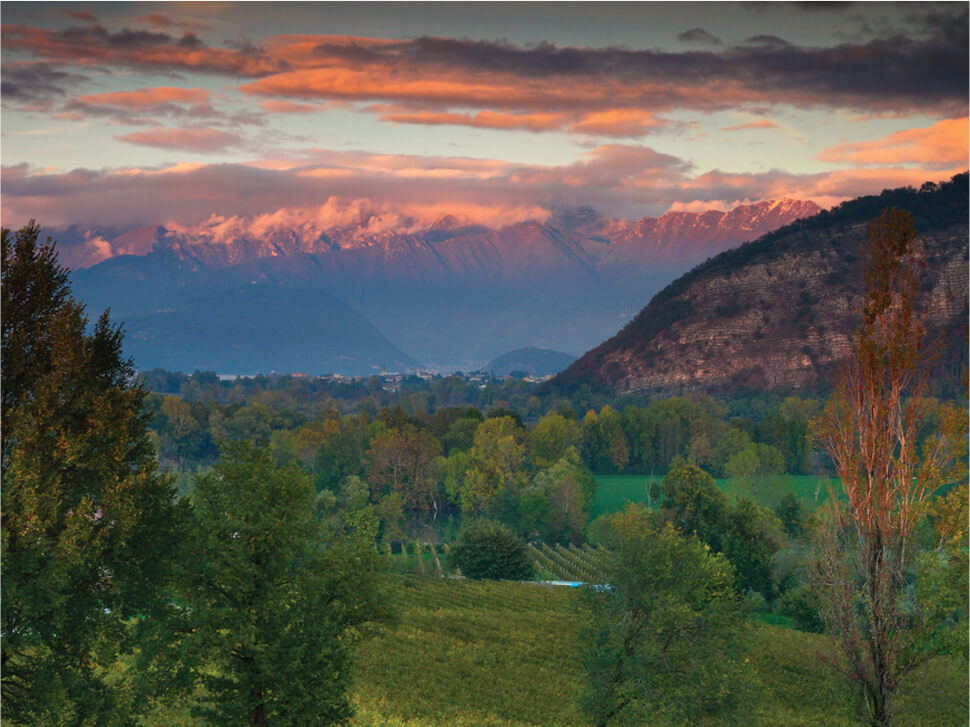 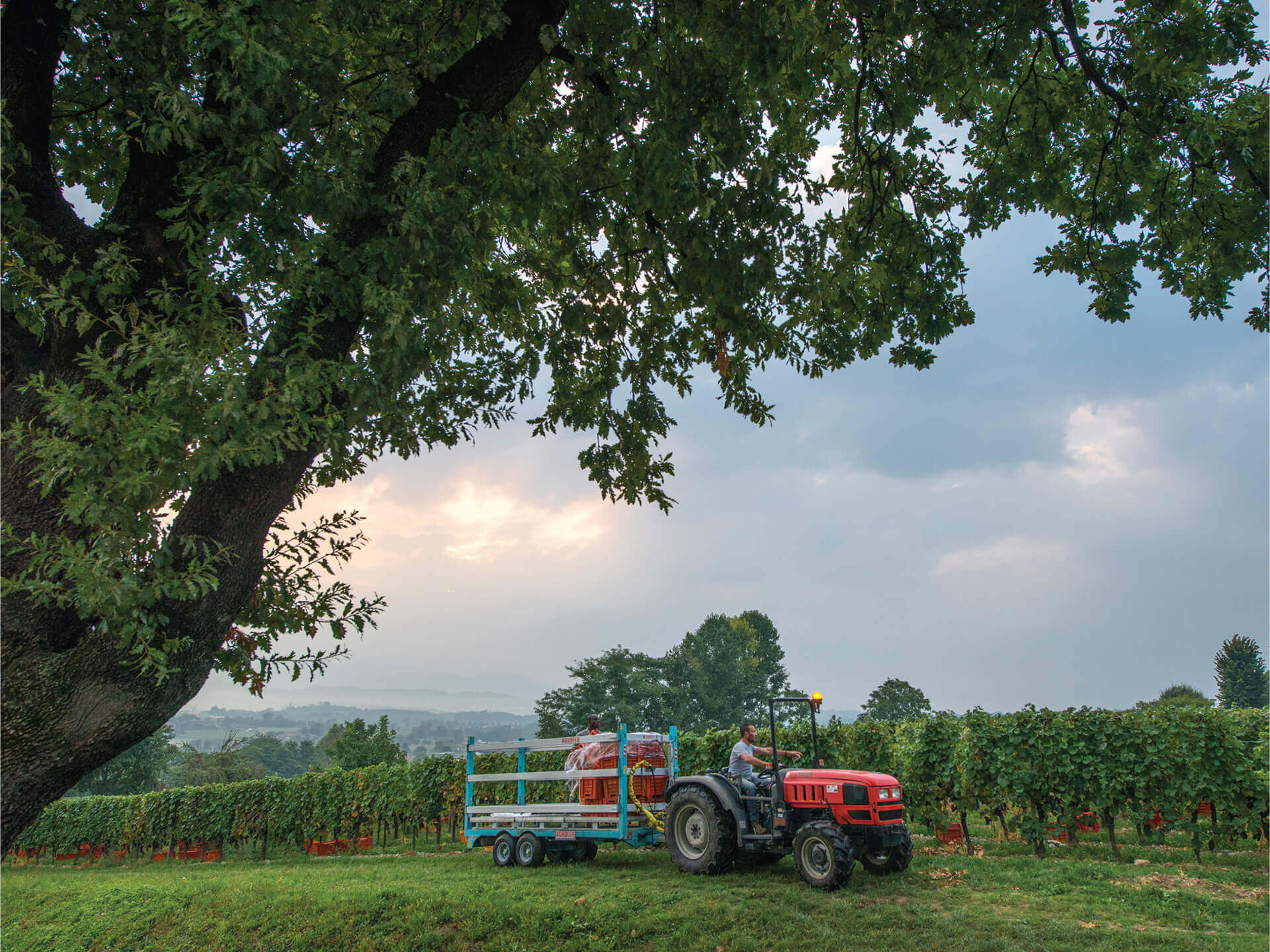 Franciacorta’s current status as an excellent but relatively obscure sparkler stands as a challenge for would-be buyers, but also as an opportunity for wine trade members to introduce customers to something novel and strikingly delicious. The wines are made in a wide range of styles at various levels of sweetness, but they can be clustered into five basic categories:

Accounting for the lion’s share of Franciacorta produc- tion, these wines must be aged a minimum of 18 months on the lees and not released prior to 25 months after harvest. The category includes every level of finished sweetness. Those levels are set at Undosed or “Non-Dosato” (0 to 3 grams per liter), Extra Brut (0 to 6 g/l), Brut (0 to 12 g/l), Extra Dry

These must contain a minimum of 25 percent Pinot Noir. They may be non-vintage, or vintage dated and labeled as “Millesimato” or “Riserva,” in which cases they’d be subject to the ageing rules for those categories. If sold as NV, Franciacorta Rosé must spend at least 24 months on the lees. Any of the five sweetness levels may be utilized when finishing Rosé wines.

These must contain at least 85 percent of the indicated vintage. They must spend no fewer than 30 months on the lees, though many vintage wines spend considerably more than that prior to disgorging. Release to the market may not happen for a minimum of 37 months after the harvest, and again, any of the five sweetness levels may be used.

This is a copyrighted term reserved for a lower effervescing, “satiny,” rather creamy style of Franciacorta. These must be made entirely from white grapes, and though most are comprised of 100 percent Chardonnay, up to 50 percent of Pinot Bianco may be used. All Satèn wines are designated as Brut, though they may be quite dry, as the maximum sweetness is 12 grams per liter, but the minimum is zero. They may be non-vintage with a minimum of 24 months on the lees, or sold as Millesimato or Riserva. Maximum bottle pressure is 5 atmospheres.

This category designates wines aged a minimum of 60 months on the lees and held at least 67 months after harvest prior to sale. Satèn, Rosé or Millesimato bottlings may carry this additional designation, but any Franciacorta Riserva must be finished as Undosed, Extra Brut or Brut.

Franciacorta is Italy’s premier region for sparkling wine, and yet it remains relatively little known around the world. These two points are difficult to reconcile, and one might reasonably ask: If Franciacorta’s sparklers are so outstanding, why have so few people heard of them?

A tempting way to resolve this dilemma is to suggest that Franciacorta is eclipsed by Champagne’s peerless global prestige as well as Prosecco’s skyrocketing popularity in the realm of Italian sparkling wine. There’s truth in both of those observations. However, they still won’t quite solve our problem, because if Franciacorta’s wines were as outstanding as I’m asserting that they are, it remains unclear how they could be so widely overshadowed.

I believe I can explain the paradox of Franciacorta’s simultaneous excellence and obscurity by reference to a number of factors. But first, I should state clearly that the best wines of the region rival the quality of the world’s best sparklers from anywhere, including Champagne. Moreover, they are consider- ably more complex and age-worthy than Prosecco, including the top renditions of Prosecco Superiore DOCG from the prime growing region in Valdobbiadene and Conegliano. Finally, the average quality of Franciacorta’s sparklers is extraordinarily high, so it is unquestionably worthwhile for any wine lover to learn about these exceptional sparklers.

The growing district is perched in the front range of the Alps in Lombardy, roughly 30 miles east of Milan and quite close to Brescia. In terms of latitude, the region is north of the Rhône. Nevertheless, it is still significantly south of Champagne, with notable consequences for growing conditions as well as the stylistic profile of the wines.

Almost all of Franciacorta’s vineyards are set between 600 and 1,200 feet in altitude. A quick look at Brescia on a map of Italy shows that virtually no spot in the country is situated as far from a sea as Franciacorta, and yet its climate is essentially Mediterranean due to being adjacent to Lake Iseo. The compact, sharply defined DOCG growing region rises up from the lake in the clear form of an amphitheatre, with the lake moderating temperatures year-round while also providing striking beauty to the area.

Glaciers formed both the lake and the land on which the vineyards lie, advancing and receding over vast stretches of time, and ultimately leaving highly varied soils in their wake by gouging certain spots while depositing earth and stone elsewhere. Overall, drainage in the area is exceptionally good, compelling vines to sink deep roots. Soils concentrated with sand, rocks, lime and clay predominate, but their locations are quite spotty. Nevertheless, the region has been closely studied and painstakingly mapped. As a result, growers are very well informed and also quite experienced at placing different vine varieties where they can excel.

Chardonnay and Pinot Noir play leading roles in Franciacorta as in Champagne, with a little Pinot Bianco as a third player akin to Champagne’s Pinot Meunier. Another parallel with Champagne is that Franciacorta is made by the méthode traditionelle of performing the second fermentation in the bottle, by contrast to the Charmat method by which almost all Prosecco is made from the Glera grape.

Accordingly, it isn’t surprising that the stylistic profile of Franciacorta leans more toward Champagne than Prosecco, but there’s also the important difference that Franciacorta’s more southerly location and warmer climate result in base wines that are notably lower in acidity than those used to make Champagne. Consequently, finished Franciacorta tends to be subtly but distinctively “softer” in character than Champagne.

Despite the importance of this difference, it shouldn’t be overemphasized. The higher acidity of a particular Champagne may be neutralized in sensory terms by the buffering sweetness in the dosage, whereas a Franciacorta finished with very little sweetness may actually seem to be the drier and “edgier” of the two wines. This practice is becoming increasingly widespread in Franciacorta, and the resulting ultra-dry wines are among the most exciting—at least to my taste.

Sheer scale is another factor differentiating the region and its wines from Champagne, as Franciacorta’s production zone is only one tenth of the size of Champagne. This compact footprint results in strongly coherent growing conditions, which may help to explain the strong consistency of the region’s wines from producer to producer.

Although the highly varied soils in Franciacorta would not seem to lend themselves to this coherence and consistency, the confined scope of the region is one reason why it has been possible to map the soils so precisely and match them to the optimal vine varieties. This is certainly related to the high quality average, as is the possibility of crafting blends from base lots with differing nuances imparted by soil variations.

Fully 90% of Franciacorta is made by small- to medium-sized producers working with estate-grown fruit, and there’s little doubt that this dramatically enhances the region’s wines. I hasten to acknowledge that the biggest houses in Champagne do amazingly good work in vast volumes with predominantly purchased fruit. Nevertheless, it seems clear that their accomplishments are mostly achieved despite their size rather than because of it. And just to put things into perspective, Veuve Clicquot Ponsardin alone makes more bubbly that the entire output of Franciacorta, which totals around 14 million bottles annually.

Stringent production regulations also contribute to quality and consistency in Franciacorta. Only hand harvesting is allowed. Maximum crop loads are lower than Champagne’s at 60 hectoliters per hectare, and the minimum maturation period on the wine’s lees is 18 months for non-vintage Franciacorta by compari- son to 15 months in Champagne. Considered in overall terms, the rules that apply to Franciacorta are indeed the strictest of all traditionally produced sparkling wines from Europe.

Considering these factors in combination illuminates the overall quality of Franciacorta, but that only serves to re-raise the question of why it remains relatively unknown in world markets. Undoubtedly, limited production is important. Cost issues are also crucial, stemming from at least two sources. First is that small- and medium-sized producers don’t benefit from the economies of scale enjoyed by big ones. Second, buying land is very expensive before anyone can even start producing anything. Rates are high everywhere around Brescia, and particularly pricey when enhanced by gorgeous views of a mountain lake—as is the case for much of the vineyard land in Franciacorta’s amphitheater setting.

In past decades, the relatively high prices asked for bottles of Franciacorta were not much of a problem for producers, even though prices were much higher than those associated with Prosecco and quite close to those of Champagne. This was partly because inhabitants of the general area are loyal to their region, but that’s hardly unique to this part of Italy. Perhaps more to the point, residents of the highly developed area have been quite prosperous for decades, and hence both willing and able to pony up for most of what Franciacorta produced.

Not surprisingly in light of this enviable situation, vintners in Franciacorta never expended much energy or money raising their product’s profile in world markets—until recently. World-wide recession in 2008 and economic instability within Italy served as simultaneous warning shots seven years ago, though the fact remains that exports still account for only about 12 percent of production. According to Maurizio Zanella, chair of the Consorzio per la Tutela del Franciacorta, producers are intent upon raising that percentage as well as the wine’s international stature. Efforts of note are being made toward that end, but for now there’s still not much to be tasted outside of Italy, and none of it comes cheap by comparison to Cava or DOC-level Prosecco, so it is hardly surprising that Franciacorta remains little-known.

Certain Franciacorta producers prefer not to have their wines compared to Champagne or Prosecco. However, given the fact that few consumers outside of Italy have any direct experience, such comparisons are probably inevitable, potentially helpful, and sometimes quite flattering to Franciacorta.

By comparison to Champagne, Franciacorta tends to show smoother acidity and softer texture, which can make it very inviting for novices. This is especially true of Satèn wines, which sell very well in Italy and hold strong promise abroad.

This generally soft and inviting profile might tempt one to place Franciacorta closer to Prosecco than Champagne on the sparkling spectrum, but that isn’t really true. Prosecco is more floral, fruity and immediate in its charms, owing to the grape variety as well as the Charmat method. Conversely, Franciacor-

ta is more reserved in aroma and flavor, and usually much more complex on account of deeper etching from yeast lees and extended bottle maturation.

Indeed, the best bottlings of Franciacorta can not only rival but actually surpass top Champagnes in terms of sheer intricacy. To be specific about what I regard as “best bottlings,” I mean long-aged Franciacorta at the driest styles. Franciacorta’s wines can be delicious when finished with some sweetness, but due to their more southerly origins, they don’t need sweetness to achieve balance or broad appeal. Whether labeled as “Non-Dosato,” “Pas Dosè,” “Dosage Zero” (or several other proprietary designations), even the driest possible renditions of Franciacorta can be complete and compelling, without the austere character that limits the potential popularity of non-dosage Champagne. When provided the lavish bottle ageing accorded to all Riserva wines and many Millesimato ones, truly bone-dry Franciacortas can be very well integrated, with wonderful symmetry and persistence that permits them to display remarkable degrees of nuance and detail.

Some of these won’t yet be easy to find, but the Franciacorta tide is finally rising on our shores, bringing with it some of the world’s most striking sparklers.