Roussillon Steps Out of the Shadows

Treve Ring
Greeks and Romans were the first to plant and harvest grapes in this wild, windswept amphitheatre of French Catalonia. 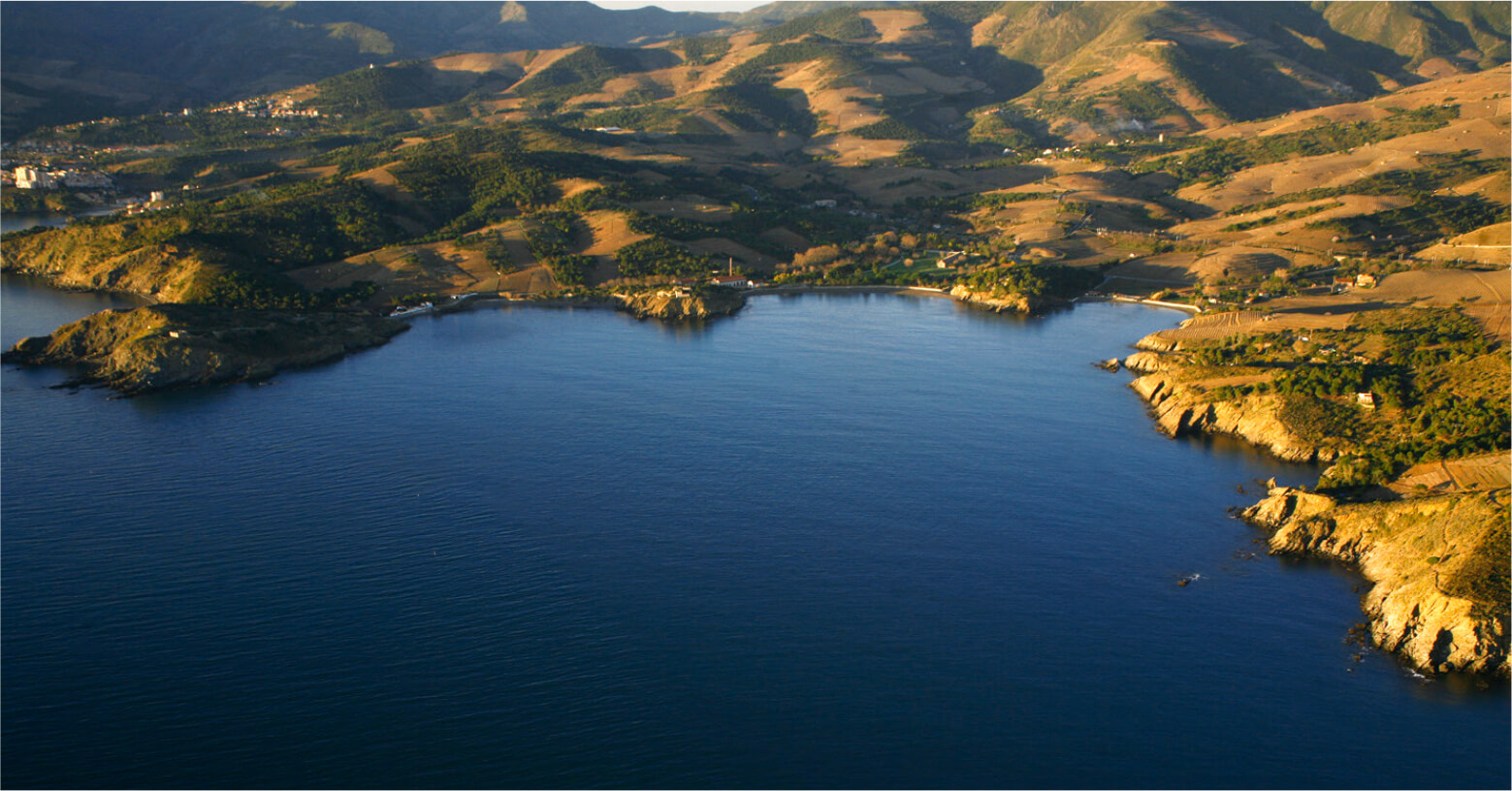 When you are neighboring the single biggest wine-producing region in the world, one responsible for one third of France’s production, it’s easy to be lost in the shadows. Languedoc, stretching from the Rhône in the east to the northern Spanish border in the southwest, covers more than 300,000 hectares (741,316 acres) of vineyards. By some estimates, one in 10 bottles of the world’s wine was produced in the area during the 20th century, and wines from Vin de Pays d’Oc are generally treated with the same sort of bulk-wine flippancy afforded to “Wine of Australia.”

The shadow effect is especially unfortunate for Roussillon, tacked onto the Languedoc-Roussillon wine region though it accounts for only 10% of the 10 million hectolitres production. In reality, the two production areas couldn’t be more separate. As suggested by the hyphenated appellation, Languedoc-Roussillon was once two independent regions – Languedoc and Roussillon. Each region continues to have its own organization for regulatory duties today (CIVL versus CIVR). Even though politics and economics led to lumping the two together into one administrative department in the late 1980’s, culture renders them separate.

Languedoc is très French in culture, food, language and character, whereas the strong influences of Catalan and Spanish life, language and culture are clear throughout Roussillon, part of France since the mid 17th century. Perpignan, the main city of Roussillon, is only 40 km (25 miles) from the Spanish border, and street signs are twinned: once in French, and again in Catalan. Many locals identify themselves primarily as Catalan, and the influence is felt in more than the accent. Cuisine is distinctly Catalan, with dishes like cod brandade, grilled snails, ample anchovies with garlic and olive oil (forget about butter down here) and the ubiquitous (and delicious) crème catalane. If you’re visiting Roussillon, it’s much easier and closer to land in Barcelona than in Paris, and then drive across the border.

With more than 28 centuries of viticultural history, Roussillon is one of the oldest wine regions in France, originating when vines were planted and harvested by the Greeks and Romans. Today Roussillon places ninth in the ranking of French wine producing departments, with 2 percent of national production by volume. At the height of production, in 1882, there were 76,000 ha (188,000 acres) of vineyards. Today that has shrunk to 21,400 ha (52,880 acres) under vine, 70 percent of which is AOP. The average yield is 28 hectoliters per hectare (300 gallons per acre), while the French average yield hovers around 60 hl/ha (642 gallons/acre). Dry wines make up more than 13,000 ha (32,000 acres), almost double the area for the sweet, fortified Vin Doux Naturels (VDNs) for which the region is famous. In 2016, total production in Roussillon was 604,000 hl (16 million gallons) , and 448,000 hl (12 million gallons) was dry. There are 2,200 wine growers with an average size of 10 ha (25 acres), and interestingly, these estates are demographically more women-run than men. Roussillon’s 25 co-operatives drive 75 percent of the wine production, with the remainder consisting of approximately 380 private estates.

Basically a giant amphitheatre situated in the Pyrénées-Orientales, Roussillon’s vineyards stretch from sea level to 650 meters (2,133 feet). It is surrounded by the Corbières Mountains to the north, the Pyrénées to the West and the Albères to the South. There are three rivers traversing the region from north to south: the Agly, the Têt and the Tech, which delineate three distinctly different valleys with a wide range of terroirs and microclimates. Massive upheavals in the tertiary and quaternary period have left a wide variety of soils and subsoils, though numerous types of clay/limestone and decomposed schist are found most commonly. The region is home to some of the oldest vineyards in France, many still trained in bush vine mode or with modified gobelet.

Hot summers, mild winters and extended autumns characterise the Mediterranean climate, with seven distinct winds cooling and cleansing the vineyards, allowing Roussillon the premier position in organic and biodynamic viticulture in France. The average rainfall is 20-24 inches annually, with storms quick and passing, most often in the fall, and fortuitously fast in draining out down the slopes to the sea. The region is blessed with plentiful sunlight during approximately 316 days of the year, with the average daily temperature registering 59 degrees Fahrenheit (15 Celsius), making it the warmest wine region in France.

Though historically known for its fortified sweet wine (again, Vin Doux Naturel or VDN), it is the dry wines that are most exciting these days, leading this distinct, obscure, often-overlooked region into the future. These are vivid, wild and powerful wines. Imagine blending Priorat with the Rhône, swept with cooling winds, kissed by the sea, variegated by limestone and schists, scented with heady garrigue scrub, and brightened with altitude. There are 9 AOPs and 3 IGPs within Roussillon for dry wines. Côtes du Roussillon and Collioure are the two AOPs for white, rosé and red wines, while Maury Sec, Côtes du Roussillon les Aspres, Côtes du Roussillon Villages, and the appended village names Caramany, Latour de France, Lesquerde, and Tautavel make up the red-only AOPs (the latter four recognized as the “cru” of the region). Reds make up 59 percent of the dry wines, with rosés second at 26 percent, and whites last at 15 percent. Roussillon reds range from floral and supple carbonically macerated wines crafted from Carignan and Syrah, to powerful, dense and complex wines, often laced with minerality and garrigue, and with structure for aging.

The three IGP dry wines are Côtes Catalanes and Côte Vermeille for white rosé, red and Rancio, and IGP d’Oc, for white, rosé and red. Dry Rancios are quite interesting, with a mandated oxidative maturation for a minimum of five years. Whether white or red, they all turn a deep amber or walnut hue over time, providing fantastic matches with many dishes in the region’s Catalan cuisine. Another quirk to note: AOP wines must be a blend of grapes; single varieties are not allowed. This is why there are many top quality IGP wines of single grapes and sites (a sommelier’s secret gem). There is also a splash of traditional method sparkling wine, made less than I would have imagined, though producers I spoke with chose to defer to the fizz of nearby Limoux, in Languedoc, rather than undertake the process themselves.

As home to more than 80 percent of France’s Vin Doux Naturels production, and a history that dates to the 13th Century, it is no wonder that Roussillon is closely associated with memorable and slightly mysterious images of sun- baked glass demijohns of fortified wines. As in other wine regions with a lengthy tradition of historic wines, this is both a burden and a curse; the vast majority of producers focus on their quality table wines, with sweet wines making up a minimal proportion, or none at all, of their total production.

Grenache Blanc, Gris and Noir, Macabeu, Malvoisie de Roussillon (a.k.a. Tourbat), Muscat à Petit Grains and Muscat d’Alexandrie are the grapes permitted for VDNs, the blend of which is dependent upon the five distinct AOPs.

VDNs begin when the must registers at a minimum of 14.5 percent alcohol, which is when mutage is applied. This is the addition of pure, neutral, grape-based alcohol (96 percent alcohol by volume) to arrest fermentation and thereby keep the remaining sugar in the wine. The spirit is added in 5-10 percent of volume to the must. There are two ways for producers to do this. They can apply mutage to white, rosé or red grapes that have been direct pressed or from skin contact maceration, while they are in the liquid phase. Alternatively, they can apply mutage on the marc to obtain concentrated wines full of color and structure. In this case, the mutage acts on the marc layer, utilizing the extractive power of alcohol over two to three weeks.

After fortification is complete, the main process ruling VDNs commences, namely, aging. With the exception of Muscat de Rivesaltes and certain white, rosé and red VDNs like Rimage and Grenat (which are bottled early because they are meant to be drunk young and fresh), VDNs are determined in their character by the extent of their oxidative aging, which lasts between 36 months and up to 20 years and beyond.

Ambré (white grapes) and Tuilé (red grapes) are oxidative styles within the Rivesaltes, Maury and Banyuls AOPs, and indicate at least 30 months of aging has occurred. If Hors d’Âge (very old) is applied to the label, it indicates a minimum of five years oxidative aging was applied, and there will be no vintage year. If a wine is labelled Rancio, it reflects a wine that is of Hors d’Âge lineage, but with intense oxidative aging, often through time in glass demijohns set outside in the hot Roussillon sun, where wines can concentrate for up to one year before being returned to casks, barrels or tanks in the cellar. 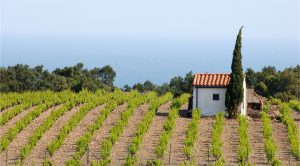 1b An Outbuilding in Collioure