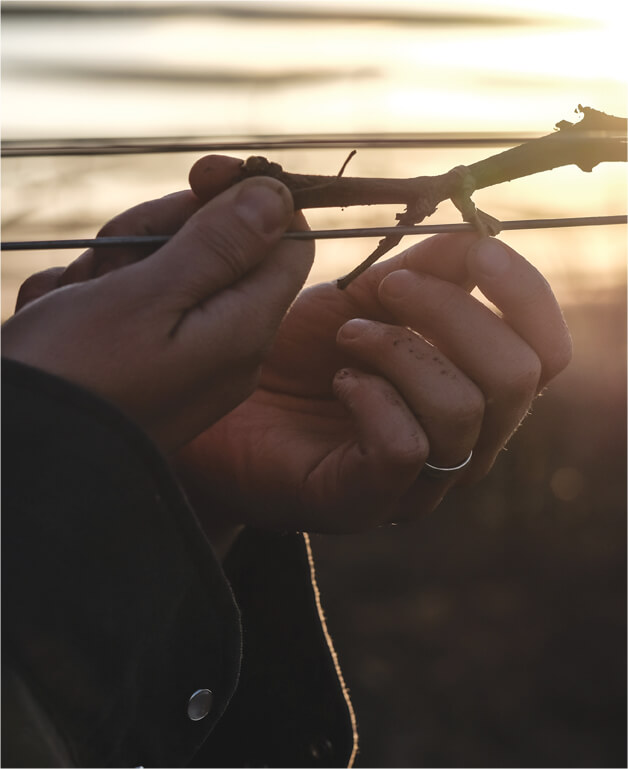 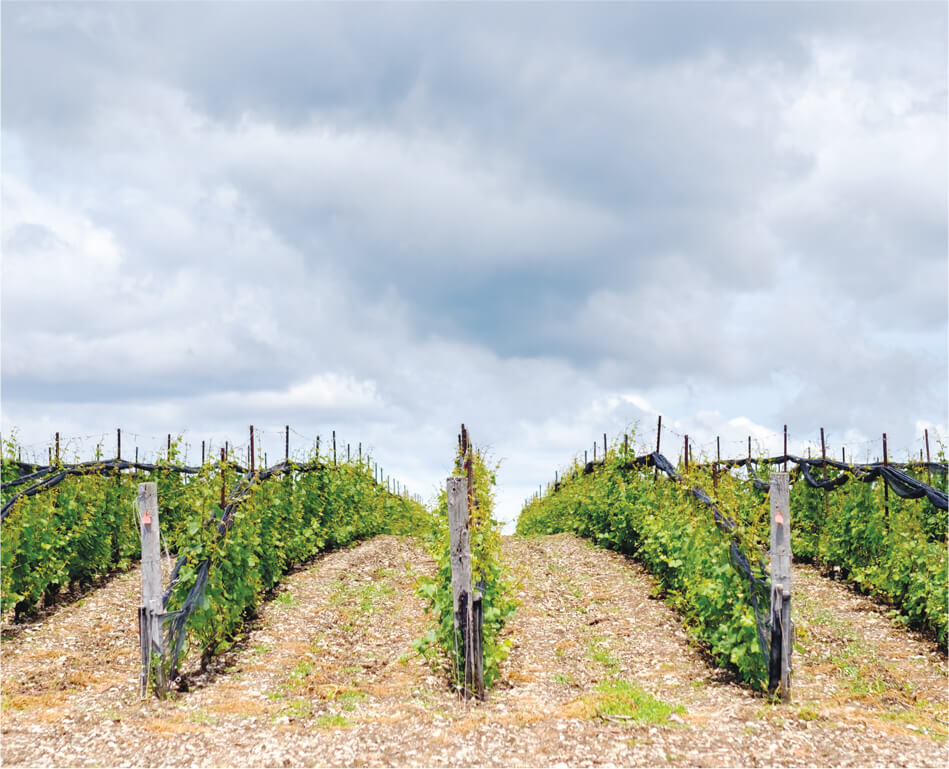 Why: This graceful and curvaceous Chardonnay has a round mid-palate with a dabble of glycerol and generous fruit. Yet, it boasts just enough acidic lift to keep things sassy. There’s something for everyone in the floral, leesy notes that combine seamlessly with toasty oatmeal and baked apples.

Among the first to plant vinifera in Ontario, the Pennachetti family established themselves here in the 1970s. While Riesling is their “thing,” everything bottled at this estate exceeds expectations. This one is juicy and creamy, full of nectarine, linden leaf and straw.

This is a sappy Riesling with striking minerality, devout purity and impressively mouth-coating texture. It’s drier than dry in a Pfalz-like way, but there’s a lovely apricot character to it that gives it tons of approachability.

Why: Winemaker Sébastien Jacquey says he likes to “create a kind of tension in his wines.” This one achieves that with its firm, almost brawny structure. It’s an über Pinot with boisterous forest fruits, fallen leaves and smoked cigar dryness. Every sip is compelling.

This wine could use some time as its vanilla, bergamot notes aren’t yet settled in fully with the wine’s lovely fruit ripeness. It’s a drinker now even so. There’s lovely fruit succulence, touches of glycerol and pleasantly grainy tannins. If you don’t find this vintage, don’t worry. Winemaker Shiraz Mottiar’s touch with Gamay is golden. Every vintage is good.

Why: This wine is a fascinating combination of buttermilk, white bread toast and nutmeg. It’s youthful and juicy with a generous core. If you encounter some reduction, just decant 30 minutes. It merits the wait in complexity and density of unfolding flavors.

Why: This wine doesn’t skimp on structure. It’s a bit strict in tannins, even now, but that makes it great for food. So do its generous aromatic top notes that smell of spice box, fallen leaves and mulled red fruits. It seems to be aiming to be a big, hunky style of Franc, but it registers more as cool-climate and a bit aggressively lean in a very positive way.

Why: While this wine is super-serious, it is also a people pleaser. It shows apricots, orange peel and straw. Despite its high acidity, it offers a supple and balancing mid-palate. Its yeasty finish will appeal to flavor geeks and its organic and biodynamic fruit will appeal to eco-nerds…not that those personalities can’t come in the same package.

Why: Stratus (along with Southbrook) makes some of the region’s heftiest reds. Flying winemaker Paul Hobbs has worked with Stratus, and his style is clearly imprinted. This Bordeaux style blend shows some fancy new oak, grippy tannins and mouth-coating viscosity. If bold is how you roll, this is the way to go!

This purple-colored wine has tons of fresh blackberries, boysenberries and branches. It smells of black pepper and has crackling acidity and vivacious aromatic charm.

Canadians have made wine since the Vikings sailed the seas. While icewine—imported from Austria by one of Inniskillin’s co-founders thirty years ago—may be Ontario’s original claim to wine fame, today the region has a highly diverse and thriving wine scene.

Ontario’s production consists largely of varietal bottlings of Riesling, Chardonnay and Pinot Noir. Given those varieties, it’s not surprising that traditional method bubbly is big here, too. Bordeaux grape varieties also play into the mix, yet Gamay may prove to be the region’s most dynamic red grape.

Thomas Pennachetti of Cave Spring Cellars said, “Winters can be brutal, and they are the biggest challenge in picking varieties.” Nerves of steel are required, too. Pennachetti said that the best Riesling years are when the fruit is unripe in September and not harvested until November. Talk about hang time—for grapes and those who tend the vines.

It’s all about latitude. Sure, Canada is far north compared to Texas, but Ontario’s winegrowing regions are south of Minneapolis and most of the state of Maine. The Niagara Peninsula—at 43° latitude—sits on the same parallel as southern Oregon (a burgeoning warm climate wine growing region four hours south of the Willamette Valley) as well as Bilbao.

The five Great Lakes hold 20% of the world’s fresh water, and two of them—Ontario and Erie—significantly affect temperatures in the air over the lakes versus the land. The air hovering over the water is cooler in the summer and warmer in the winter.

The heart of Ontario wine country lies around Lake Ontario. Its existence depends on air movement: air pushing inland from the lake hits the Niagara Escarpment, which thrusts it back toward the lake. It’s brisk—like a hockey puck rejected by a goaltender (just imagine Reto Berra or Pekka Rinne.) The escarpment’s year-round breeze aerates the vines there while protecting those in the flats from springtime frost.

Lake Erie—though 26% larger—is shallower and sits at a higher elevation. As such, it freezes faster, but it still offers moderating effects in the summer. For the vines, it helps that Erie is further south, sitting just below the 42nd parallel.

This is the heartbeat of Ontario wine. It is also Canada’s largest wine region. It has two regional sub-appellations: Niagara Escarpment and Niagara-on-the-Lake. Looking at Growing Degree Days (GDD), it is just slightly warmer than Burgundy.

Niagara Escarpment is a 335-meter high ridge that stretches along the Niagara Peninsula. The top is dolomite; toward the lake, there’s shale. The escarpment’s limestone, though younger than Burgundy’s, slopes gently like the Côte’s, and today hosts four sub-appellations: St. David’s Bench (well east of the others), Short Hills Bench, Twenty-Mile Bench and Beamsville Bench. On top of the escarpment is Vinemount Ridge.

Niagara-on-the-Lake tends to be 9° Fahrenheit warmer than the escarpment during the summer. Niagara Lakeshore, Creek Shores, Lincoln Lakeshore, Four Mile Creek and the Niagara River appellations lie here. These soils are dominated by silt and loam.

Prince Edward County sits on the northeast shore of Lake Ontario, kitty-corner to Niagara. It’s only 150 miles as the crow flies, but it’s three hours from Niagara by car. It’s not just cooler there. It’s colder there. Burying vines to ward against winterkill is common practice. These are leaner, more vibrantly acidic wines.

Lake Erie North Shore is Canada’s “Deep South.” It’s the country’s southernmost region. There are just a handful of wineries here. Being so “southern,” the summers are predictably warm, so these wines tend to be fuller bodied.

Ontario’s wines combine prominent minerality and generous fruitiness. The former characteristic is due in part to Niagara’s rather cool climate. The latter comes from its short, intense growing season that can be head-spinningly hot and humid.

The wines show limited viscosity with acidic firmness yet finessed tannins (in reds). New oak use and alcohol levels are mostly restrained, save the occasionally heady bottling based on Bordeaux varieties.

The Ontario VQA appellation system was introduced in 1988. The standards aren’t lenient, and the evaluation board isn’t shy about rejecting wines that aren’t up to snuff. Winemakers beware: lose the VQA, and lose the tax break.

Ontario VQA wines are 100% grown in the region. The regional VQA wines are at least 85% sourced from that specific region and entirely from Ontario. Wines bearing more specific origins—single vineyards, for example—must be 100% from the designated source.

How To Discover Ontario Wines

There’s nothing like being in situ to get a sense for a wine region, its styles and its makers. Niagara wine country is only a one-hour drive from Toronto’s international airport and slightly closer to Buffalo, New York. But, if Ontario wineries—and Niagara Falls–aren’t on your radar, just pour a few drops of Ontario into your glass. More of these dynamic eastern Canadian wines are arriving in the US, and here are the ones to put on your “it” list.