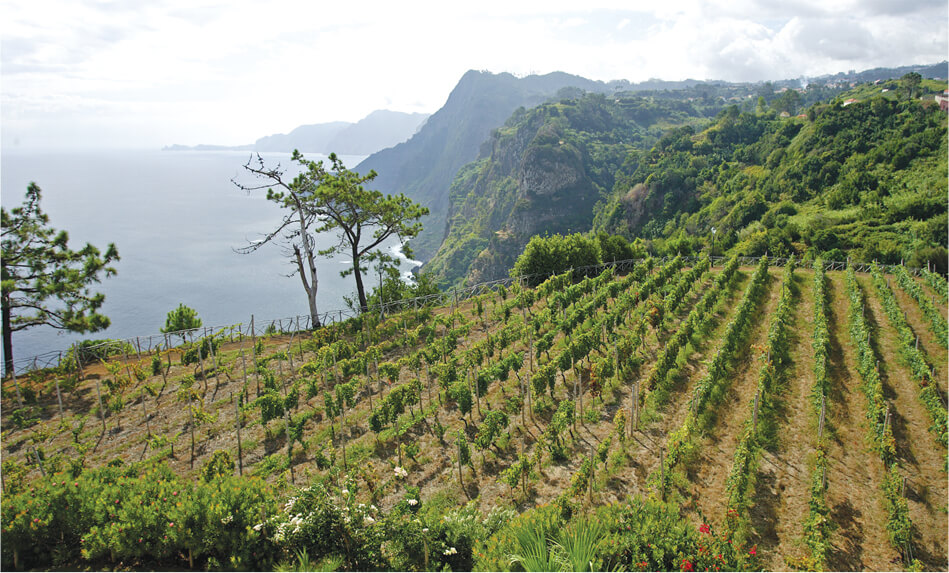 Locals suggest that Madeira’s low soil pH promotes high acidity in all of the island’s fruits and wines. It’s a fanciful, tenuous connection—yet the island wines of Madeira demonstrate such remarkable acidity that the association appears plausible, even if not scientifically verified. It’s the unyielding tension between this acid and the sugar and alcohol in the best wines of Madeira that makes them especially distinctive, particularly after being forgotten for years of ageing and saturated with oxygen in the canteiro rooms of the island’s few remaining producers.

Madeira’s discovery by Portugal in 1418 launched that nation’s golden age of exploration, and the island served as an important port of call for ships departing for the New World. Perched atop Madeira’s 580-meter-tall Cabo Girão cliff, one can squint into the blue Atlantic and imagine past nations of conquerors and trade, an age of sailing ships and stiff drinks.

Each successive century brought an innovation: in the 1400s, vines came from Crete to the island; the first casks exported to the New World left Funchal in the 1500s; producers marketed the first vinho da roda, gone there and back again, in the 1600s; the practice of fortification and the first estufa appeared in the 1700s. In time, the British American colonies became the most important export market for the island’s wines. The wines of Madeira wound their way into the fabric of early America. (Did Betsy Ross sip Sercial while sewing the US flag? Did Washington cross the Delaware in a Malmsey haze?) The US would remain the most important market for Madeira until the 1860s, when civil war closed the profitable markets of the South. Greater disaster soon befell the island itself.

Phylloxera arrived in 1872 and completely altered the island’s viticultural landscape, as growers turned to Tinta Negra and hybrid vines at the expense of Madeira’s nobres castas. The last vintages of Moscatel came in the early 1900s. Two great varieties of the 19th century, Bastardo and Terrantez, all but disappeared. Terrantez, which produces a powerful frasqueira style akin in sweetness to Verdelho yet fuller in body, is produced in insignificant amounts today due to its miniscule yields and inability to graft easily. (At his store in Funchal, Luis d’Oliveira recounted an offer to triple the pay of a Sercial grower for replanting with Terrantez grapes. The grower responded: “Will you tell me what three times zero is, then? That will be my harvest!”)

Even those four nobre white grapes every sommelier commits to memory are less prevalent today than their availability in American markets would seem to indicate. Most Malvasia on the island today is Malvasia Branca de São Jorge, rather than the original Malvasia Candida of Crete. There are grands crus of Burgundy that contain more acreage than all of Madeira’s Sercial and Bual vineyards combined. Verdelho, a workhorse prior to phylloxera, ascended to “noble” status only in the 20th century as its plantings dwindled. Tinta Negra, once universally derided, may likewise be improving in reputation. There are compelling Tinta Negra colheita wines available, and its versatility is always undervalued—it is the only grape on the island that can capably produce wines across the entire spectrum of sweetness. In 2015 the name Tinta Negra was finally authorized for use on Madeira labels, perhaps recognizing that an inherited distaste for the island’s most important and most planted grape has begun to recede as winemakers reimagine its value.

Only seven producers are left on the island. Many once-independent houses are now just brands of the Madeira Wine Company. Along with the MWC, Vinhos Justino Henriques, d’Oliveira, Barbeito, and Henriques & Henriques are of most interest to American buyers today. For many years, Madeira wine seemed poised to simply disappear, a relic of another age. Yet  now, propelled by the energy of winemakers, the passion of importers, and the excitement of collectors and sommeliers, there is a turnaround…albeit a small one.

The island has a new highway system, a winding track withdrawing into and reappearing from countless tunnels crisscrossing the island. Hypermodern design hotels and enticing gastronomy are available in Funchal. Yet such modern touches generally remain out of place on this otherwise rural and impenetrable island. Grape growing is a small farmer’s pursuit. Walking along one of Madeira’s canal-like levadas, one spots gardens hanging improbably along nearly vertical inclines, and basalt stone poios (terraces), carving a few feet here and there for every manner of vegetable and vine. Lush canopies are trained along overhead latadas, in small plots averaging just over half an acre in size. (Larger vineyards are simply not possible on an island with so little flat land.)

In the era before phylloxera, the vine was omnipresent along the coast, but the disease, the disappearance of key markets (the American South and the Tsars’ Russia), and changing consumer tastes eroded its importance. Most modern vineyards are clustered in only two concelhos, or districts—Câmara de Lobos on the warmer southern coast and São Vicente in the north. Vineyards are strictly a minority: there are less than 1,250 acres of vines on an island nearly 200,000 acres in size. Madeira’s vineyards are now mere footholds on the coast, dwarfed by the great forests of the interior. But they are footholds for one of the world’s most remarkable wines. Regardless of the mercurial whims of the wine drinking public, Madeira continues to enjoy a time-honored status as one of the world’s most remarkable wines.