College Cellars of Walla Walla is a bonded winery within the Walla Walla Community College Institute of Enology and Viticulture. It is the winery where students enrolled in the various associate degree programs in enology and viticulture (and wine business as well as certificate programs in fermentation science) learn to make wine. The performances of the wines that have been submitted to the TEXSOM International Wine Awards suggest that students in this program are learning their lessons well. Out of ten wines entered in 2015, six received awards: one gold, two silver and three bronze. In 2016 they entered nine wines and received eight awards: two gold, one silver and four bronze—plus the Award of Excellence in two categories for best Merlot and best Washington Red.

I recently visited the Institute housed in the Center of Enology and Viticulture to experience firsthand how students are learning to make wines on a qualitative par with those made by professionals from around the world. After meeting the faculty and staff, touring the winery and vineyards, and speaking with current students and alumni, the answer is clear. For starters, this requires an innovative culture guided by a strong leader (the WWCC President, whom I met), as well as an innovative curriculum that rejects traditional learning models. In turn, the curriculum must be fortified by the involvement and support of the local wine community, and taught by qualified, enthusiastic and engaged faculty and staff.

As you’d guess, the college is located in Walla Walla, a small town in eastern Washington where agriculture has long played an important role in the broader region’s economy. Wheat is an important crop in the rolling hills surrounding Walla Walla, but wine grapes have become a big contributor to the area’s economy. The Walla Walla Valley AVA, or American Viticultural Area, was established in 1984. At that time, there were only four wineries and 60 acres of grapes according to a report prepared for the Washington Wine Commission by Stone- bridge. Walla Walla now boasts more than120 wineries, giving it the largest concentration of wineries in the entire state, and those wineries draw fruit from 1600 acres of vines, as reported by the Walla Walla Wine Alliance.

Since viticulture, winemaking and wine tourism have become such important parts of the region’s economy, it’s not surprising that Walla Walla Community College’s president, Steven VanAusdle, recognized the need for a program to prepare students for the wine business in his community. Indeed, under his leadership, the school won the Aspen Institute’s Prize for Community College Excellence in 2013, tying with Santa Barbara City College as best Community College in the United States. This prize is awarded in recognition of, “Exceptional student outcomes in four areas: student learning, certificate and degree completion, employment and earnings, and high levels of access and success for minority and low-income students.” They note that VanAusdle instituted the enology and viticulture degree program in 2000 when there were 16 wineries in the valley. He was clearly prescient about the college’s role in the growth of the wine industry.

Dr. VanAusdle found plenty of support from the local wine community, which makes sense in light of the fact that area wineries benefit from a corps of trained workers flowing from the program. Their advisory board reads like a “Who’s Who” of Walla Walla wine, including wine pioneers Marty Clubb  of L’Ecole Cellars, Gary Figgins of Leonetti Cellars, Norm McGibben of Pepper Bridge Winery and Rick Small from Woodward Canyon.

The Center of Enology and Viticulture is housed in a building designed with a Tuscan flair on the college campus. A life-sized sculpture of a grape picker that was crafted by local artist Jeff Hill stands on the grass near the building’s entrance. Just inside the entrance is a tasting room with displays of medal-bedecked bottles. I was surprised to see a sign for ETS, the Napa Valley based wine analysis laboratory, over an office door to the left of the tasting room. I was greeted by Danielle Swan-Froese, who coordinated my visit and is responsible for the administration and management of the program. She also manages compliance for the winery and retail operations.

Danielle introduced me to Tim Donohue, who apparently teaches everything about the process of winemaking. He is full of energy and enthusiasm, and could probably teach anything—however dry—and make it interesting and engaging. While taking me through the winery, he explained that the program grows 60 to 80 percent of the grapes used for the students’ wine projects. They also source grapes from other vineyards, many run by former students, including the highly regarded Ciel du Cheval and Sagemoor vineyards. The goal for each harvest is to work with 40 to 50 lots from which the students make wine. “We rewrite the curriculum every year, based on the harvest,” he said.

Students are thrown into the maelstrom of harvest work in their first semester. They pick grapes and make wine knowing nothing more about the process than whatever experience they happened to bring with them. Trial by fire—or juice, in this case. They get to know the side of winemaking that entails exhaustion and purple-stained hands, as opposed to the side of starring at winemaker dinners in fancy restaurants. Some students pack it in at this point, having found none of the glamour they associated with being a winemaker.

Sabrina Lueck, who teaches winemaking and manages student winemakers during harvest, explained that they are able to make wine in the first semester because ETS is on campus. When she was a student at Cornell, the curriculum dictated that students learn the chemistry of wine prior to being allowed to make it, based on the rationale that students needed to be able to analyze the grapes and juice as they were being processed. By contrast, ETS provides the analysis at WWCC, and the faculty helps students manage their wines, so that practical engagement and analytical know-how are attained simultaneously. By the time that students take their wine science classes, they already understand the practical usefulness of analytical capabilities.

Jeff Popick is in charge of the school’s vineyards. Over four acres are planted with a mix of varieties including Barbera, Cabernet Sauvignon, Cabernet Franc, Carmenere, Malbec, Marsanne, Merlot, Petit Verdot, Rousanne, Sauvignon Blanc, Semillon, Tempranillo, and Viognier. Two vineyards, the Wine Center Ice Wine Vineyard and the Campus Drive Viognier Vineyard, are actually located on campus. Jeff showed me the other two vineyards located at the Airport District, the Stan Clarke Bordeaux Vineyard and the new Estate Vineyard. Students were just finishing the task of selecting the two stron- gest shoots to become the trunk of each vine. Winter temperatures can be so cold in eastern Washington that vines can freeze to the ground, so having two trunks doubles the chances that a vine will survive to produce grapes in the following growing season. Students continue to work with the vines at all stages leading to the harvest.

Tim Donohue recalled that the program’s youngest student was 18 and the oldest 73. Career goals range from first job to midlife career change. For example, I met two former Air Force pilots who have started a winery and an Amazon.com attorney who wanted to leave the city and the corporate world. I also met the three alumni who made the Award of Excellence 2013 Merlot, Susan Chlarson (now at Locati Cellars), Mike Collins (now at Blue Mountain Cider) and Fiona Mak, (now at Artiflex Wine Company).

They recalled that the 2013 growing season provided an embarrassment of riches. Their shared responsibility was supposed to be limited to one bin of Merlot grapes, but due to the bumper crop of Merlot that was harvested, one bin turned into four. They used an optical sorter to select 25 percent of the grapes for their wine, with the remainder directed toward the Scholarship Blend. After tasting several wines to help determine the style they wished to make, they researched how to go about achieving that style.

The trio encountered a bit of a problem when their optically sorted grapes turned out to be so small that they were very difficult to crush. They didn’t want to use an enzyme, but it was necessary, not least because they had to bottle the wine in order to graduate. Although they’d have preferred a longer maceration, there wasn’t sufficient time. Fermentation lasted 14 days, after which the wine was aged in two new and two neutral American oak barrels, where it aged for nearly 18 months. They racked the wine twice along the way, and at some point added 40 gallons of Malbec before the finished product was put through a cross-flow filter prior to bottling.

The process included many tense moments, but they were reassured by the fact that so many people, namely ETS and the faculty, were overseeing the process. They noted that, “If there was an issue, we knew about it that day.”

Since his arrival in 2010, Tim Donohue has made a practice of entering students’ wines in competitions. He considers these judgings the program’s equivalent of what peer review does prior to academic journal publications. Their wines win awards regularly in regional, national and international competitions.

Grape growing and winemaking are not the only topics of study. “We cover everything from soil to sales,” said Tim. Classes cover other topics such as marketing, winery operations management, regulatory compliance, industry leader- ship, and even public speaking—for those “glamorous” winemaker dinners. As previously mentioned, a tasting room is the anteroom for the Center’s building, and is open to the public on Fridays and Saturdays. Wines are offered for online sales as well, and the program also offers membership in its wine club. Sales of College Cellars wines serve to support the program, and as for an overall evaluation of its success in its educational mission, well…the proof is in the wine. 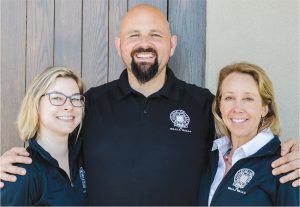 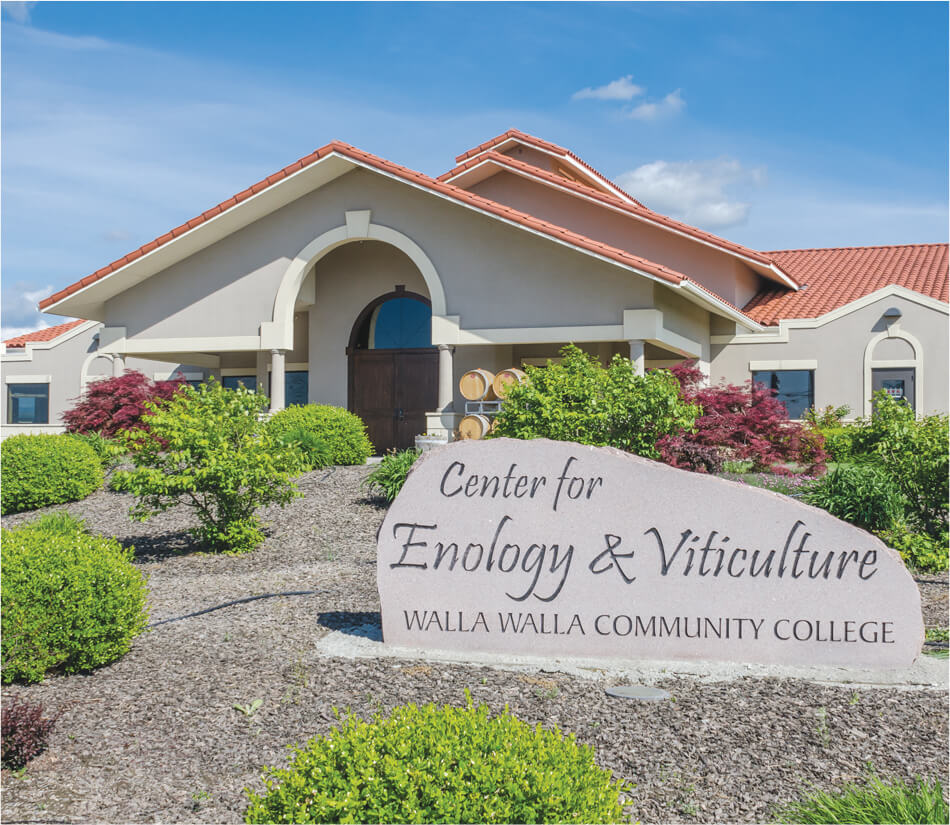 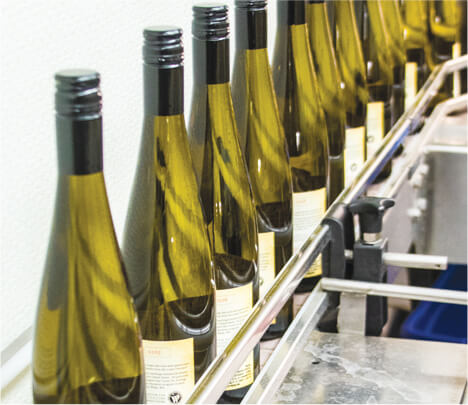 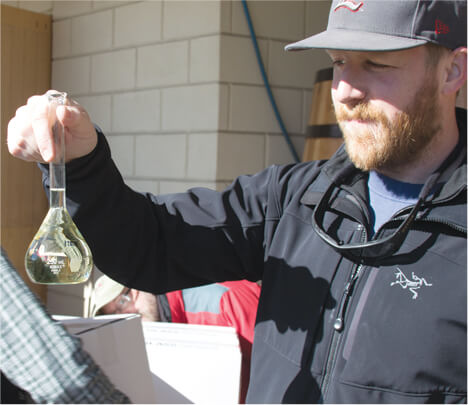 Tim Donohue has made a practice  of entering students’ wines in competitions. He considers these judgings the program’s equivalent of what peer review does prior to academic journal publications.