Small businesses are flourishing and a cross-pollination of cultures is bringing new dimensions to the burgeoning wine scene.

Since the 1500s, Spanish missionaries, Russian refugees, and other emigrants sought to establish a viable winemaking enterprise in the region,but were challenged with political upheaval and, eventually, phylloxera. The last century saw a revival as settlers from various nationalities arrived in Valle de Guadalupe, the epicenter of Mexican viticulture, with vines in tow. “You have these cultures that learned to get along because they were just trying to find a simpler life,” says Tom Bracamontes, owner of La Competencia Imports. “They all started growing grapes and the next thing you know they’re making wine together.” However, it wasn’t until the 1980s that quality winemaking in the Valle truly took hold, with three large wineries—L.A. Cetto, Santo Tomás, and Monte Xanic—dominating production.

Still, it’s only been within the past ten years or so that the area has truly flourished, growing from a handful of wineries to around 130. Much of the expansion can be attributed to winemaker Hugo D’Acosta. A French-trained oenologist, D’Acosta returned to Valle de Guadalupe after his time abroad to discover farmers ripping up Grenache and Carignan to meet the big cooperatives’ demands for fashionable Cabernet Sauvignon and Merlot. After questioning why they didn’t produce wine themselves, he realized there was a dire need for training in the Valle.

In 2004, he established a school, La Escuelita, with two primary missions: preserving these ancient varieties and turning growers into winemakers. “We literally created our own competition—but at the same time, and this is much more important, we increased the enological diversity in the Valle,” says Thomas Egli, an oenologist who works closely with D’Acosta. Today, the school continues to provide education and an open forum for conversation among wine community members. The opportunity to experiment brought a new energy to the region as graduates “…took those basic skills and realized that you can’t make wine from the books,” says Bracamontes. “La Escuelita became the foundation, but not the bible you live by.” Currently, there are about 120 varieties being cultivated in the sandy, loamy soils. Blends dominate production, with unusual yet successful combinations (such as Tempranillo with Nebbiolo) rewriting the “do’s and don’ts” of winemaking. As Bracamontes explains, “The extreme nature and conditions of Baja make everything react just a little differently than elsewhere. The region challenges you to put your thinking cap to the side and just taste the wines for what they are.” The cosmopolitan region is drawing interest from international winemakers. Jac Cole, a consulting winemaker from California who worked at Spring Mountain Vineyard, traveled south 4 years ago. “I went down on a lark, and was markedly surprised when we stopped at different places and tasted the wines. I found some real winners. It wasn’t that every wine was great, but every winery had a great wine, and that was an indication to me that if they weren’t batting 1000 they certainly had the potential to achieve real excellence. If you can make a few good wines—you can make a lot of good wines.” Over time, “[there’s been a] level of professionalism and technology that has infused the whole valley. The bar keeps getting raised,” says Cole. Opportunity lies in defining, “What do we do best, what can we promote, and how do we want consumers to identify with the Valle?” Even though there’s a proliferation of producers, most boutique wineries turn out less than 5,000 cases, and with the dynamic culinary and tourism scenes in Mexico City, the Valle itself, and beyond, there’s enough demand to keep distribution strictly domestic. So why export?

“What motivates them to sell to the USA is a high taxation rate in Mexico—around 42% on a bottle. You avoid that by exporting out of the country,“ says Bracamontes. Additionally, as an emerging region without much infrastructure, the Valle’s producers must rely on global suppliers for most of its their production needs. Nearly all materials—corks, capsules, labels, bottles—must be paid for in dollars. French barrels are priced in Euros. “The biggest thing people don’t understand is that grape contracts are set in US dollars. The only thing that’s paid in pesos is labor; that’s the only cost savings.” If producers sell 10- 15% of their wines in the USA, the profits are sufficient to help offset costs. With talk of border taxes and a potential wall between the USA and Mexico, all are watching this region closely. However, winemakers are confident that the momentum of quality winemaking and renegade spirit that has propelled them forward for the past ten years will continue to drive the region’s future.

Over time, “[there’s been a] level of professionalism and technology that has infused the whole valley. The bar keeps getting raised.” 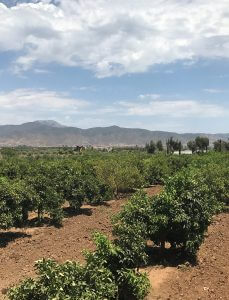 Rows of Vines and a Painted Barrel at the Emeve
Photographer: Darcy Arnold Sacks 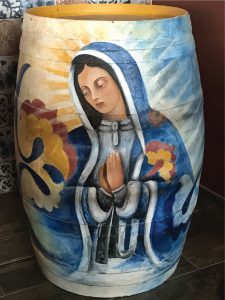